9th April 2010
Many sounds can be heard in the woods, but by far, my favourite is that of laughter. Uproarious, bellowing, tummy stitching giggles, caused by a rolling joke (or in this case a pure fantasy). You never know what you will find if you go into the woods today... or what people will be talking about..

Let me tell you about my first attempts at making a Spatula. It was modeled on a very nice paddle shaped stirrer in the Clissett Wood kitchen. It has an unfussy but attractive short turned handle and a wide oval flat. A nice design. My first attempt to copy this was back in April 2008.

When you start greenwood working you make all the obvious mistakes, and this had the lot... My spatula was wide, had a good short handle, but an unfortunately wedged shaped flat, too thick at the neck end and pointed to a fine tip at the other to render it pretty much unserviceable for kitchen use. In all seriousness this was my best attempt at the time, and being cook thought it would be rather nice to scatter lovingly carved treen around the kitchen for all to enjoy.

As I entered the kitchen that evening with my Spatula to hand, it was promptly labelled a Spanking Paddle by the male populous of that group, back in 2008. Some imaginings of the cook (ie. me), doling out quiche (not quickies) and discipline in equal portions were bandied about, to which I don't think I've ever regained a true sense of authority or composure when handling a spatula.

Now, to get back to last weekend. Those of you (YOU KNOW WHO YOU ARE) who have been VERY BAD are about to be delivered up to the internet with all your sordid little fantasies... Ahh the joys of blogging ;-) This group, (with only the tiniest bit of encouragement from me) latched onto the greenwood spanking paddle idea with such gusto that it was Christened 'The Spankula'. 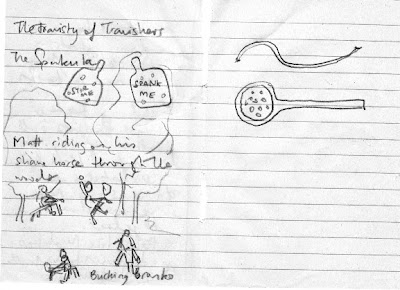 Greenwood fetish items for kitchen discipline I dare say have not been entered into the Bodgers Ball treen competition before. I have drawn the plan of the design of the Spankula 100. One side carved in the wood it reads STIR ME, the other side SPANK ME.

I attempted to make a prototype and got as far as placing it on the lathe, but unfortunately my workshop time ran out. I have instead, an unfinished (but handled) lump of Silver birch with protruding splinters should anyone feel the need to take matters in hand. Although it was a valid attempt at a prototype, the surface area I felt, would not surfice.