Designers head to the chopping block...

A full and furious week of thinking and making was going on at Clissett Wood these last 6 days. Starting with a nervous group of Designers wondering what they'd actually let themselves in for. They swapped the glamourous shiny studio lights of London for the leaf-strewn wintery mud tracks of a Herefordshire woodland, rustic and as natural as can be.

Not everyone had met each other before the course, and only Chris Eckersley had previous bodging experience at Clissett. Guarded design ideas slowly came forward as the days progressed and most notably for me, more people than I'd ever seen before, came into the kitchen while I was cooking to draw up sketches and measure angles on detailed plans. A flurry of chair leg and spindle making ensued as the designers came to grips with the realities of using a shave horse, pole lathe, cleaving break and workshop hand tools for the first time. A lot of designers may be good at drawing up a concept, sketch or basic prototype, but not always used to making the finished article themselves. Nearly all would have experienced something new here.

A few of the group had large projects in terms of days available, in particular Gareth Neal with his Windsor style bench. Other designers had more hoops and steam bending than our usual courses require and Gudrun had at least 3 late nights in the workshop. Ohh, these demanding designers! These late night sessions involved amongst other activities, head torches on the lathe...is that really wise? I couldn't even see to eat my food most evenings.

Camping it up were Gareth Neal, William Warren and Carl Clerkin, until something happened in the wood mid-week (which I won't go into here) which meant Carl had to leave the woods in a hurry for a bath... It might have been the monsters, something in the wood shed perhaps, or foxy (our burning mascot) that spooked him. Needless to say, those not camping missed out on the rain, rain and more rain, stumbling around in the dark and sliding out of the woodland huts in the mornings trying to light a fire for a cuppa. 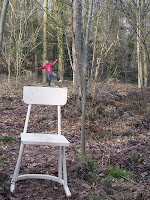 Carl Clerkin standing on his chairback. (http://www.carlclerkin.co.uk/)
Work progressed steadily throughout the week, but always with the looming sensation of the Sunday afternoon deadline. This was when the reporter from Crafts Magazine (read part 1 here) would return to see how things were going, a photographer to take 'finished' photographs and of course the removal van to take away the finished chairs for the Milan Furniture Fair, just next week. I'm really quite glad I didn't have any deadlines apart from the 11am tea break, and 1pm lunch to make.

A large part of being a designer as I have personally experienced is about hitting deadlines. Since doing less commercial design work myself and more making, I've found it really helps to allow some headspace in order to think about things a bit more. Having 2 or 3 more days at the start for the designers to absorb their surroundings, relax and play with the materials might have been quite beneficial for them. It might  have meant they would have possibly tried different ways of working and created even more interesting work. None of them decided to do freeform work for example and work intuitively from the shapes found in the trees. I think they might have missed a trick here. All of the designers worked on the lathe, nothing wrong with that in itself, but, machined parts can be made virtually anywhere. Having a resource with infinite shapes and combinations such as can be found in the trees is what is really amazing about being a greenwood worker for me.

As it was they were really getting straight into the making...all the chairs were finished however, with Gareth working right up to the wire. Slightly odd having a photographer and reporter wandering around the workshop all day I thought. A peculiar young chap from London doing a Phd about 'amateur crafts' also turned up to see what we were doing too...'Amateur crafts' actually means hobbies to us lay people...we told him he was in the wrong place! He had misunderstood the term bodging and thought he was coming to see a course about how to 'make do and fix things together'. No, that's not what it's about. Anyway, here are some of the highs and lows of the week...

Me to Carl after 3 days on the pole lathe ... "Are you still scratching on that stick?"

Amos (despite not having many components) has so much to do on the last day it all seems a bit impossible. Looking like things are eventually coming together, he realises his chair seat is splitting down  the middle. This piece was the best Herefordshire elm Gudrun had in stock too which was a very unnerving moment for her I think. The glue, syringe and straps came out. What a shame that was after Amos spent a whole evening shaping that seat.

In a mildly embarrasing alcohol induced moment at the Green Dragon pub I offer to show the group some bodgers dances we've made up at Clissett Wood previously...I will post diagrams of said dances on this blog eventually including the two button dance.

The 'Shhh shhh' not of the lathe but of the sandpaper can be heard throughout the workshop despite those designers being told it's not necessary. They are not oiling their seats either, despite being advised to do so in order to protect the end grain. Will that be a wise decision under the hot lights of Milan?

The campers on night one decide to cook pizza...the oven isn't hot enough and the pizza sits there sadly in the oven uncooked until the oven is relit for another hour and then wow, a very nice pizza with a crispy ash base after 10pm.

Carl to me after 4 days on the pole lathe ... "Are you still scratching on that stick?

Dave produces a predrilled seat mid week. I have to say this was a big cheat. We don't use electric tools at Clissett normally and he thought it was going to be too much like hard work. Booo!

Crys of "Bodgers....bodgers..." in a football chant kind of way can be heard ringing around the workshop from Carl thoughout the week.

Me to Chris on the last day ... "it's much better than your last chair".

Will, Gareth and myself wonder if Rory has been making hazel wands in his spare time?

Carl is a cheese and jam man...he cooks up halloumi cheese and fried eggs for breakfast. Yummy.

Finished group photo. More photos on view on the Clissett Wood facebook group. It was a pleasure to cook for you all this week!


STOP PRESS : Video footage of the week here.
(Never has so much sandpaper been used in greenwoodworking...hey designers...it's not necessary!)

And since then, the Crafts Magazine (May 2010 issue) article about the Designers week is available here.