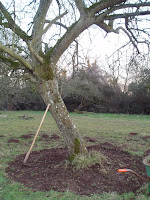 Urban Kluth specializes in the care of ancient trees, especially fruit trees. He practices and teaches very old and now largely lost methods of tree care. These methods were widely practiced throughout Europe at one time.

The practices concentrate on establishing a very specific planting hole to create a micro climate for the tree to grow (originally done several years before a significant tree was planted). The care of the root system and the bark also ensures healthy growth and eventually longevity and sustained yield of fruit. Village communities often had one of these significant and valuable pear or apple trees, often planted in a symbiotic relationship with a grain such as wheat or rye. 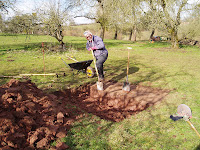 With this method villages did not go hungry, the village as a community cared for its food resources and everybody was involved, as these methods are very labour intensive. A now esoteric but highly relevant 'transition' model? Fruit trees have been found to have thrived in Eastern Europe for 300 + years, in Sweden up to 600 years, and villages in Siberia have been self sufficient employing these methods. 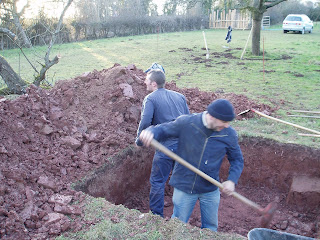 Urban came over in February 2010 from Germany to induct a few people into these methods in Gudrun's old orchard. Many of her old fruit trees had collapsed and Urban was interested in preserving the healthier ones first. Urban will be coming over from Germany again in July 2010 for a week if anyone is interested in learning about these methods and gaining some hands on experience. Matt Hatter, Keane, myself with Urban's guidance have prepared some example trees for teaching later in the year.

Pic 1 shows preparation of the surface  for the care of an old or damaged tree. Taking the any growing matter away from the base of the tree, cleaning the trunk area especially, adding sand to aid the drying out of the bottom of the trunk. Further work will be carried out later in the year.

Pic 2 and 3 show the digging of a new 2m x 2m x 2m planting hole. Once dug, this hole will be filled with large boulder stones at the bottom, graduating up to small stones at the top mixed with a lightened mixture of sand and clay. I suggested the use of a JCB for this job, but Urban explained that compacting the soil around the planting hole with heavy machinery was also detrimental. Most of the methods used so far have been extremely labour intensive for only a few people. I could understand why a whole community would need to be involved to look after such trees. More methods such as bark cleaning and pruning will be explored in July 2010.