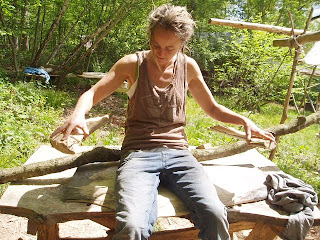 The Welsh Stick chair course is a popular course bringing together some of the more rustic inspired chairmakers and also those looking for a more refined looking chair. Ro, on the right is a returning course student and was also assistant volunteer cook on this occassion. Previously she has made two very wild chairs which perhaps reflect her personality? Here she is working out the placement of the arms and back for a seat for herself. Characteristics that keep coming back in Ro's work are knotty bumps on the rail at the back, slightly odd arms, and a non-symetrical seat (usually with a rotten hole in), alongside knobbly legs etc. She had an old ash plank, some Rowan for the legs and arms and had found a knotty ash branch for the back rail. I helped her drill the legs in the seat after much deliberation. 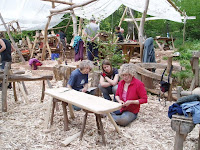 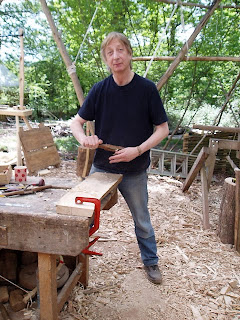 Chris Eckersley, one of the Furniture Designers on the Designers course came along to make some tressils for a table to go with Designers chairs. A couple of the woman wanted to make outdoor benches and here you can see Gudrun working out the placement of the legs and angles with them. 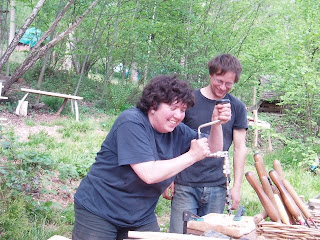 Jo, (the cook on this course) had also come along with her large stash of dried chair legs and yew seats to try to marry some together. Plying her hungry co-workers with plenty of homemade cake, home grown dexter beef from her small holding and all kinds of preserved pickels and treats, Jo dropped some heavy hints that she was in need of drilling help as her elbows were a bit dodgy. Here you can see Jo quickly posing for the camera before Paul is handed the drill back to get on with the hard work! Come on Paul, only 3 more seats to go! 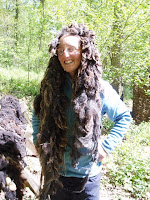 Jo also kindly brought me 3 fresh sheep fleece that had been shawn just that day. 1 ram lamb jacobs, and two jacobs x cotwolds lamb fleece. Very soft and lovely dark colours. I decided to wash these in the woods as the weather seemed pretty good. It took most of an evening to boil enough hot water over the campfire, and half fill the metal dustbin (washed out mind you). I put a good dollop of soap in the water till it became slick and then gently submerged two skirted fleece in the hot water, leaving them overnight. The next morning the rinsing in the shower hut began, giving it all about 4 rinses of warm water until the water ran clear. Then, hanging the fleece up to dry out in the sun, and turning it occasionally, most of it was dried in a day. 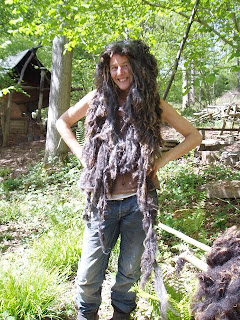 Then some bright idea was to catch all the volunteers in the newly found jacobs fleece-wig. I am still waiting for the photos of Jo and Matt to get back to me...at the moment I think Ro looks the most naturel, and Paul looks more like captain caveman. 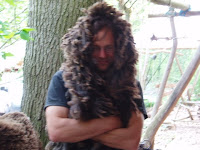 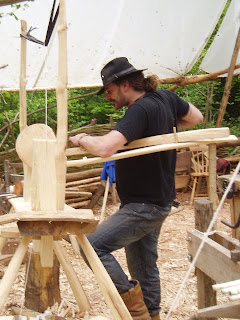 One of our course participants was Matthias from Denmark. He had seen the Mastercrafts programme and just had to come and 'do it'. He had a gift for picking things up visually very quickly, and managed to turn himself a bowl, make a hoop backed side chair and also try out some rustic stool ideas. He also had the habit of whistling a half finished tune throughout the course which made a few of us chuckle. Matthias's clogs had some fascination for people here too, and since they had worn out while he was here, he donated them to me for plant holders. On his way home he was selling sheep skins from Poland and was hoping to come back to Clissett Wood as a volunteer in the future. 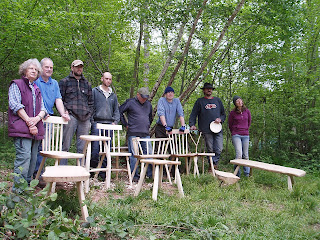 So here is the line up of the finished chairs and benches.
Well done group! 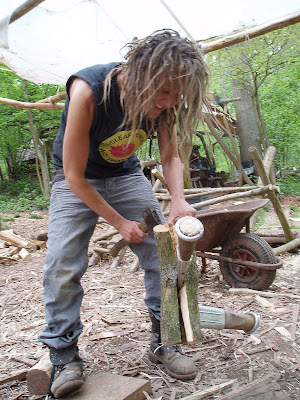 Finally, I would like to post this picture of Ro attempting a 3 way split of some knobbly ash. I believe she was looking for 3 equal legs, and I caught her doing this without guidance... How many wedges have you got in that piece of wood Ro? Well, I guess we all have days like this...