Just returned from the wood with another nearly finished project. I was working on this freeform bench with an ash seat and silver birch legs and back. I started turning the spindles on
the recent Designers Week course and had them drying in plenty of time. What a pleasure it is to turn silver birch! Yummy! I had a little experiment steam bending a few of the turned birch spindles but they mostly decided to break at the knots. 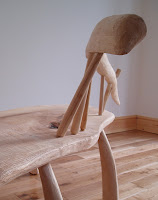 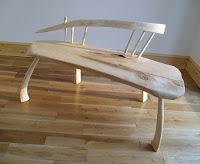 I had intended to put two back rails on this bench, but decided in the end not to obscure the curved rail and twisting spindles on the right hand side. Drilling all the holes at crazy angles without help, but using two sliding bevels, sticky tape and a large amount of 'guestimation' was interesting. This is something I'm getting used to so I can work on my own when needed.

I still need to put a few butterflies along the split in the seat, level the legs, and general tidying up. I'm hoping this will be ready for the Ellesmere exhibition coming up in mid June.