Saturday I roughed out a bowl blank from one day fresh felled sycamore. The grain was superbly straight in this wood and had just the pattern of pinstripes, clean and white. So this sat on the lathe ready until Sunday as I was busy doing repairs for the Clissett Wood kitchen including making new legs for broken benches and new shave horse parts.

I was also contemplating my elm plank which was to be my next big project as an indoor bench. I had discovered it was still being eaten by woodworm since my last inspection, as many new holes had appeared. It was decided that I could put legs on it after it was treated by Gudrun, but it'll be left at the wood. I was very reluctant to use this as a piece I might want to sell despite having cleaned most of the surface and crevices up. I've had a very unpleasant experience with woodworm treatment and a cowboy builder in the past, and the thought of going near that stuff again makes me simply nauseous. 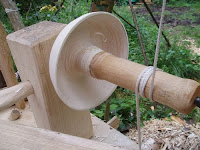 That evening we had a nice chat getting to know each other and a wee nip of whiskey before bedtime. Nobody told me it was cask strength, as I wondered why I was staggering back up the hill after only a snitch. Good sleep though!

Sunday was one of those days when you think you shouldn't be in the workshop, when accidents keep happening for whatever reason. I gave myself a bang on the forehead with the back of an axe handle which slipped out of a log I was moving. Later an egg came up and I was likened to the Klingon Lt.Worf out of Star Trek. Not a good look! I was not dizzy and was functioning reasonably normally as far as I could tell. 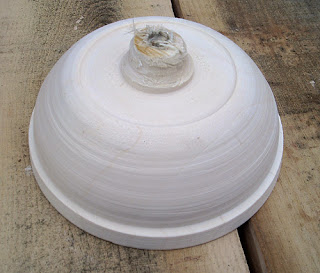 On returning from the wood I looked up Frontal Lobe on Wikipedia, it says:
"The executive functions of the frontal lobes involve the ability to recognize future consequences resulting from current actions, to choose between good and bad actions (or better and best), override and suppress unacceptable social responses, and determine similarities and differences between things or events. Therefore, it is involved in higher mental functions."

I should therefore warn you that anything I do from now on may or may not be socially acceptable ... and no change there then... just tell me if I overstep the mark please?
Shortly after this happened I managed to scrape a gash in my leg. Time to have a cup of tea... and move away from the sharp objects Liz... 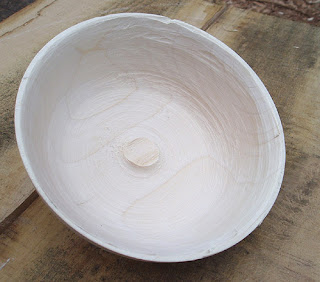 On Monday morning I got up early and turned a 'nice' sycamore bowl. It was nice in that it was deep and thin, although I'm not entirely sure my finish is improving on the inside. I seem to get a good finish on the outside, but loose it a bit on the inside. I also came across my two problem areas yet again. (At least I've identified them now.) Getting the rim right and leaving it alone once you start carving out the inside of the bowl - (hence numerous knife marks in the rim) and then cutting out the cone, which is still too fat and chunky to break off easily. I watched Robin Woods you tube video (Masterclass: Robin & Michail share skills ) and see them just snapping the bowl off like a biscuit. 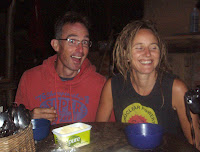 Anyway I gave this bowl to Ro as a present since she was doing a brill job as Vegan cook this week. She was making beetroot risotto and we discussed dying the bowl with the beetroot, just out of interest. It didn't happen though. 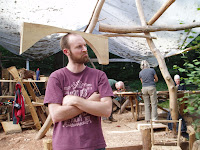 Tuesday I awoke to the sound of mooing in the next tent, competing with the cows over the road. (There are some very special people that come to the woods, some more special than others it seems.) So here's a few pictures... Hamish and Ro, Paul sporting his grumpy moose horns. (Happy horns go upwards.) And below, Gary on the lathe turning is way through a piece of wood. 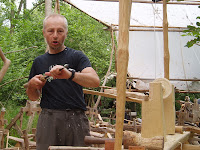 Today I made an awful lot of wedges, as I have 101 spare parts to put together as part of 'The Random Turning' project - all odd turned salvaged pieces from the workshop and demo scraps, tidied up and hopefully going together into miniature small chairs. I drilled holes for my ladybird stool which I intend to upholster, and made a very tiny 3 legged stool. Other workshop repairs included 6 legs for lathe side tables and 4 curved legs for the elm bench to be completed on the next course. 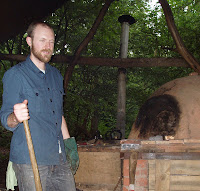 Tuesday evening we had a great Italian night, with Aussie Paul making pizza dough in the morning and supervising the cooking (in forno) in the evening. A little vino was drunk, splendid pizza served up and some amusing pigeon Italian spoken. I even have a hazy recollection of some singing about 'Amore'. Discussions about a coffee table book of comb-overs, and a Jaffa cake operated Jack Russell wheel powered lathe were some of the main topics of conversation that evening. 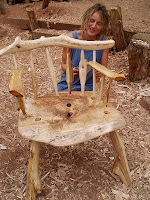 So here are some final pictures from the week. What a great set of chairs and tables. Many fine windsor seats were adzed out and some individual designs made by this strong group. Ro made yet another wildform chair to complement her last chair - the Rowan in the legs and spindle makes a striking pattern. Heather made a cricket table with oak top, Sarah, a large low ladderback. 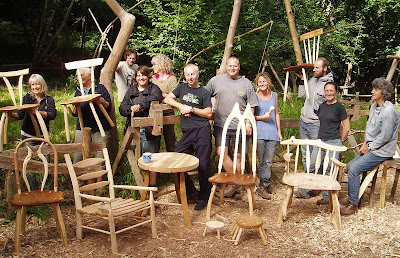 The most striking design was the double arched back seat seen in the center of the group photo. Happiness in the workshop all round it seems. 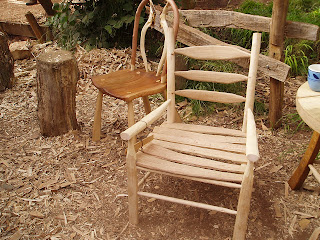 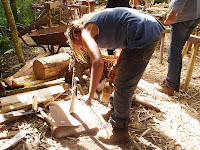 This is Sarah's ladderback with slatted seat.


This was an attempt to make two spoons from a turned blank of sycamore. It wasn't quite going to plan.. we'll see if Ro made anything out of it next time.

Lastly, we've had such lovely evenings lately, if any of you are wondering about whether camping in the woods is all it's cracked up to be, well it is...this is sometimes the best bit  - watching the campfire glow and watching the stars come out. 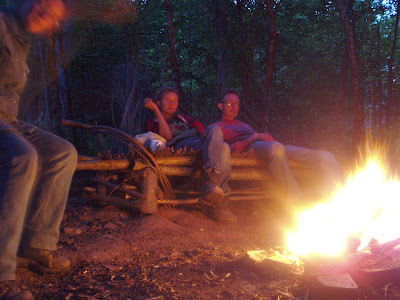