After loosing my tented moonlit scribblings twixt the laundry basket and a week elsewhere, thinking I had found them and then once again hunting and praying that something resembling a fledgling blog entry would fall from an unwashed pocket, I will now attempt to decipher said precious scraps and recall the week of The Sculptural Seating Course...

I know it's a little late, but half the reason for my pause was because of the topics covered during this week which may need a little tact in explaining, plus an adult guidance certificate?

The first event on my arrival, was to serve up my shin as a five course meal for the midges. - In a very fetching diagonal stripe. Argghhh. Wet humid woodland weather this week. On the course we had some budding chair makers and a few sculptural bench makers. We only had four campers in the wood, two down the lane in a camper van and the others leaving us to it for the evenings.

It didn't even take one evening before Ian (on a return trip to Clissett) drew out (on paper that is) his new spankula design. The Flipmate 6000... for discipline on the go! Designed like a flick-knife for rapid action.

Also mentioned was the mini version, the 'Pursemate 600' (patent pending). Note the 'snaps out and locks' design and the worryingly bottom shaped trinket on a lanyard to hang out of your bodgers pocket, (it's a sign to those in the know). And no, I don't have one of those in case you were wondering!

As I was cooking on this 5 day course, I rustled together various previously unheard of recipes. The menu this week was bodgers stew, bodgers stir fry, bodgers fruity curry, bodgers roasted veggies with pasta bake, and a few rustic nutty salads thrown in for good measure. I love not doing the washing up...

So, with my free afternoons I turned to my bowl lathe for a good practice since only making one bowl previously on the Ben Orford course. Martin had given me some freshly cut eucalyptus which I had roughed into a few bowl blanks two days previously. Unfortunately (or not) during the seering heat the blanks had started to crack in the way eucalyptus does - all over the place! I must be more careful storing the logs.. 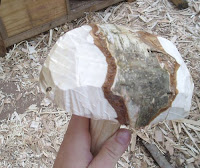 But still I wanted to see how they would work out and made one bowl each afternoon. Getting progressively quicker and more aggressive until my elbow really ached. You can see on the left, my bowls 2, 3 and 4 in eucalyptus, next to a Robin Wood spalted beech bowl which John the fireman had brought out to show me. 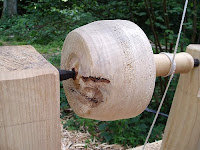 No. 5 was a sweet little silver birch mushroom just prepared for turning. I keep joking that I only want to make teacups and saucers, but this was a really lovely shape to work. Bowl turning the silver birch was a bit of a furry event on the end grain and took some cleaning up with the knife afterwards, but I just loved the size and the lightness of it. On this day I finished early and headed off to British Camp on the Malverns in search of a cool breeze and a good view to paint.

Lastly this week was a monster deep bowl of poplar. A rather large knot appeared to be coming out of the bottom, not great for the tools I know, but I wanted to see if I could try a bowl with almost straight sides and about 3" deep. The poplar was the only piece of wood to hand deep enough to try this. Despite it being hard work because it wasn't even green, it's come up with very interesting and lovely colours - greys, golds, reds and makes a convincing small fruit bowl. Thanks to John Rees for making me a little hook knife at the wood to finish off the bowls. Very useful! 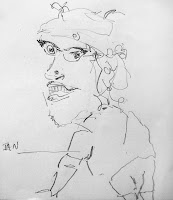 After showing a 'certain person' my efforts and them being called 'ugly', I am now launching my new range of Natures Ugly Bowls. These are quite simply the best thing in which to put your ugly fruit and veg. I rest my case. Other comments on the bowls go generally along the lines of 'it makes a good lampshade...or hat. Now the bodgers camping here had a little fashion show one evening, sporting my bowls on their heads with shavings as hair and other plank offcuts as head-garb in a modern catwalk look.

If someone has the photos, please send me some, we need to see this! The little silver birch bowl made an excellent fascinator. Here on the left you can see a cartoon of Ian sporting his bowl with a few alfalfa shavings coming out of the top. (He is also bending over the bench in a provocatively Pursemate 600 kind of way.)


So onto other matters... In da wood, der was de Clissett Crew, in-it.
An deeze were de campers gettin' up to de funny biz nez at nite. Wicked. 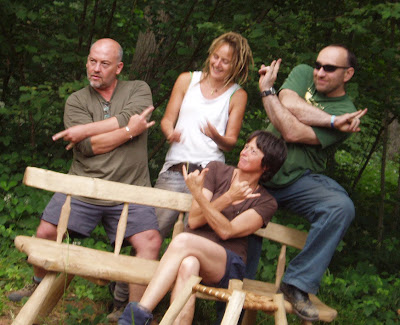 A rhyme from Ian goes:

I'm sittin' in da wood,
Workin' wit me travisher,
I see a liccle lady,
I tink I wanna ravish-'er. 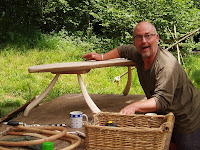 Imagine on and on..luckily only travishing went on, apart from Ian's impersonations to keep us rolling around with laughter. My only regret is not being part of this photo.


Here is a picture of Ian with his wonderful running legged ash bench. He made some metal staples to go across the split, and carved 'A Good Run of Ash' in the underside. Gudrun..get it? You could tell he was an actor when he returned from a beer-run on the last evening with bicardi breezers and stella served in a bucket of ice. Nice touch!

As well as making a substantial oak bench, and an excellent bolognaise, fireman John, who is used to making trinkets and masses of other craft things tried his hand at wood turning.. and oh dear what do you know, he made his wife a fertility dibber. 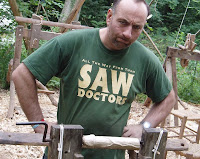 And had the ladies in a spin...

Whilst Dave made his wife Pauline a wife-beater.
All I can say is it must have been the hot weather!