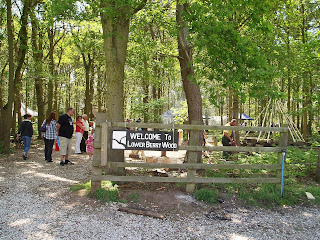 I went along to the midweek Staffordshire County Show on Wednesday and Thursday to help Gudrun Leitz on the pole lathes and learn the ropes for 'demonstrating', in preparation for my first gig at the Springwatch Big Day Out in Sandwell. I was slightly apprehensive about dealing with the public, but I've been told numerous times that 'I'm good with people' whatever that means! ha ha! This is such a great show for the greenwood workers because unlike any other shows we are actually in the woods and not in a field. 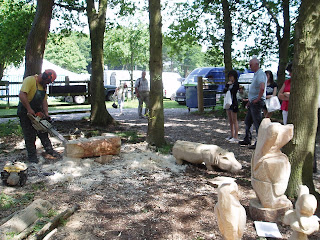 The Woodfest section of the Staffs County Show is located in Lower Berry Wood at the edge of the Country Pursuits arena. It is owned by the Staffordshire & Birmingham Agricultural Society. The wood is managed during the two days of the County Show and if you visit the wood during the show you will be able to see how management is helping to restore this beautiful wood.
The shady coolness of the woods was also welcome relief from the blazing sunshine and bussle of the market stalls...that is until Pete Harmer starts his chainsaw carving demo up. 'Is it a pig, a bear, or hippo', I ask? 'Depending on whether it goes to plan, it should be a pig', says Pete. 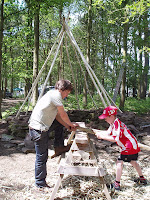 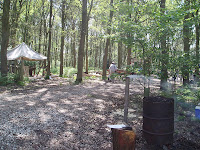 Next down the track was Paul Morton, busy making a bothy - an old charcoal burners hut. This structure had a drystone base and long chestnut poles forming a cone shaped roof. Later the roof would be covered with pine brash and sods of earth. The bothies were dark and gave only basic shelter from the weather, and not much comfort. Here you can see a budding greenwood worker having a go at shaving the bark off the chestnut poles with a draw knife. A small drum of charcoal was being made as part of the demonstrations. 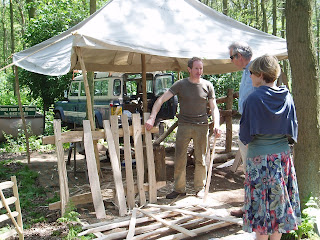 Along the track we came across Sherwood Keogh giving cleaving demonstrations. Oak is cleft for fencing, gates and hurdles. This highly skilled and hard work produces the strongest and most durable timber. 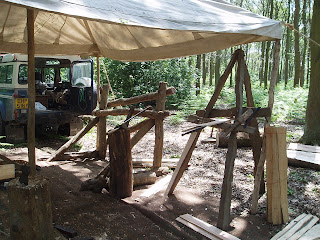 Take a look at Sherwoods cleaving breaks, I particularly liked the moveable tripod design on the right for lighter cleaving work. 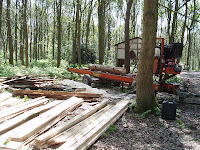 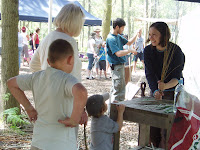 The trees felled each day at Lower Berry Wood, are extracted by horse and taken to the woodmeiser where Matthew Joiner was demonstrating. This professional mobile saw mill planks and beams the trees felled into useful timber which is then used to make bird and bat boxes as well as picnic benches in the wood.


Activities for younger children included making 'Harry Potter' besom brooms with Amy Brickhill. ( I saw a few witches flying around the woods...) Then also art inspired by nature with Jo Callaghan - making leaf collages, rubbings and painted sticks. Messy but great fun as Jo always drags me over to have a go! 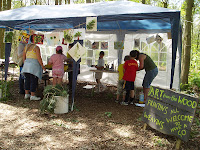 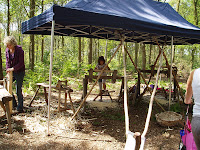 Gudrun's pole lathe and shave horse 'have a go' sessions were busy all day, where I helped out.


Opposite the pole lathes was Clog maker Jeremy Atkinson making traditional wooden soled and leather clogs. He is apparently Britain's last remaining clog maker.  At the Staffs show, he was making clog soles from fresh cherry, and people stood around fascinated watching him. 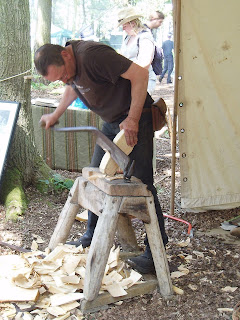 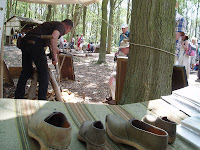 During my chat with Jeremy, Lyndsay who had ordered a pair of clogs the previous year, came back to have them fitted. She presented the clogs back to Jeremy saying she was feeling guilty she had left it so long to have them fitted and was also not 100% sure she could do it herself successfully despite Jeremy's written instructions on the clog itself.

Take a look at the fitting instructions, I just had to get a picture of this! You don't get fitting like this is a high street shop! (You may have to click on the picture to read the text.) 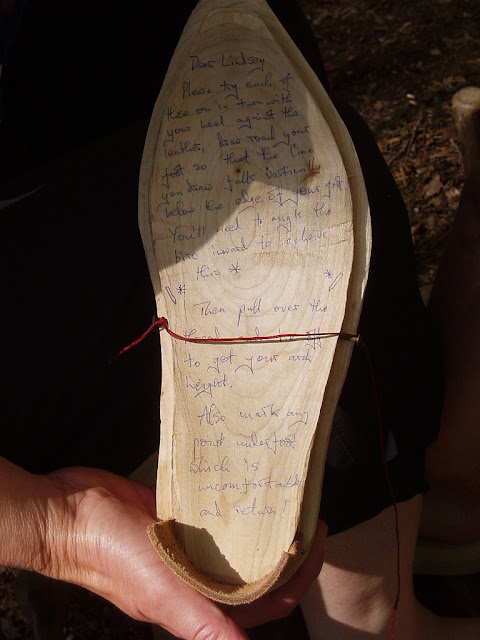 It reads, "Dear Lindsey, please try each of these on in turn with your heel against the leather, draw round your foot so that the line you draw falls vertically below the edge of your foot. You'll need to angle the biro inward to acheive this *. Then pull over the thread and tie off to get your arch height. Also mark any point underfoot which is uncomfortable and return!" 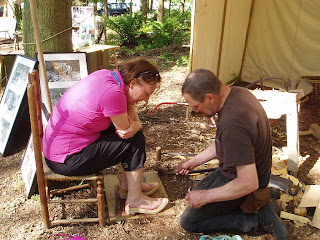 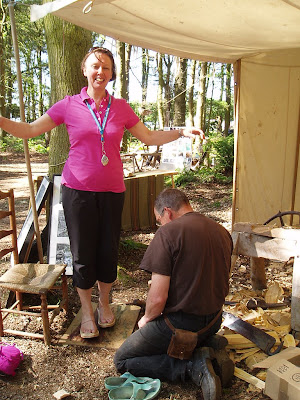 This is Lyndsey having her clogs fitted - measuring the height of the arch, checking for comfort, then deciding on which leather upper she wanted. Lyndsey said her friends thought she was crazy spending £150 on a pair of clogs, then she went on to say how 3 of them had just spent £50 each on a pair of flip flops which would last a summer at most.

Lyndsey started saving up by putting money in a shoe every day...unfortunately she started dipping into her clog fund and now has to save up again to have them finished off.

Jeremy just had a customer from 15 years ago bring back a pair of clogs for repair. He said "I make them to last, which means they cost more to make. It's harder for me to earn a living that way, because they last so long, but that's the way it should be". Hopefully we'll see Lyndsey in her new clogs by the end of the year. 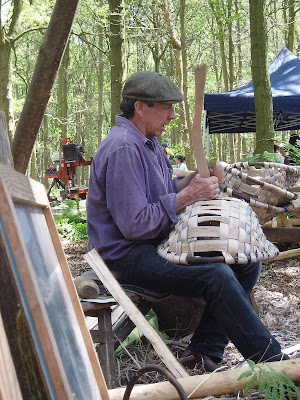 Further up the track was Owen Jones,  one of only two professional oak swill basket makers in the country. Oak swills are traditional, beautiful and very strong. You can sit and talk to Owen for hours while he makes the baskets at a rate of 2 or 3 large baskets a day. He is just one of those thoroughly interesting crafts people.


Lastly Doug Joiner and his apprentice Richard were working the heavy horses in the wood. Chain harrowing and rolling bracken, felling and hauling timber to the woodmeiser.

Lovely to see everyone having such a nice time at the show, and all of the Woodfest section was organised by Doug Joiner - well worth a visit next year! 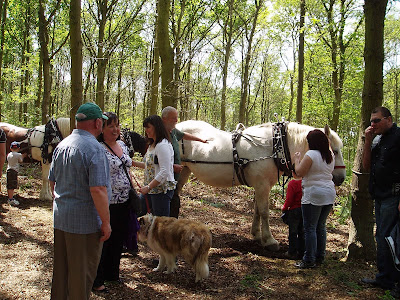